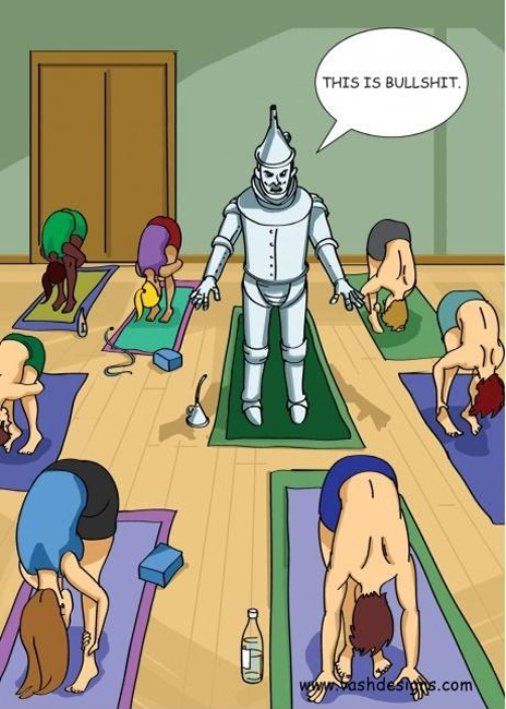 How Many Yogis Does It Take to Change a Light Bulb?

How many Iyengar yogis does it take to change a lightbulb? – Five, one to put a block under the bulb, one to wrap a strap around it, one to add a bolster, another to support the bulb with a blanket and one more to talk about their personal experience with Mr. Iyengar.

How many Ashtanga yogis does it take to change a lightbulb? – Just one but it is done with one leg behind the head, while ujiay breathing and engaging mulah banhda at 5:30 in the morning (except on a new or full moon).

How many Bikram yogis does it take to change a lightbulb? – Three, one to preheat the bulb, one to screw it in and the other to remind the yogi changing the bulb to “Lock your knees!”

Mahatma Gandhi was a revered yogi who lived a rugged and ascetic lifestyle. He often went barefoot and as a result, developed calloused feet. He ate a sparing vegetarian diet that led to very bad breath and he often fasted which left him quite weak. He was a “Super-calloused fragile mystic with extra halitosis”

A Yogi Walks into a Pizza Parlor

What did the yogi say when he walked into the Pizza Parlor? “Make me one with everything.”   When he got the pizza, the yogi gave the proprietor a $20 bill. The proprietor pocketed the bill prompting the Yogi to ask “Hey, don’t I get change?”  The proprietor said, “Change must come from within.”

The devoted yogi asked his teacher if it was ok for him to use email.  Of course, the teacher answered, as long as there are no attachments.

Two men meet on the street.

The other one replies: “I’m fine, thanks.”

“And how’s your son? Is he still unemployed?”

“I don’t know. But it’s better than sitting around and doing nothing!”

A group of bats, hanging from the ceiling of a cave, discover a single bat STANDING upright below them on the floor of the cave. Surprised by this unusual behavior, they ask, “What’s wrong with you? What are you doing down there?” The standing bat answers, “Yoga!”